All topics
Heavy periods
Treatment options
What is Cavaterm™?
What can you expect after the Cavaterm™ treatment?
Why choose Cavaterm™?

You have been living with your periods since you were a teenager. Flow intensity, duration and frequency have probably varied with time because every woman goes through hormonal changes. Normally periods occur approximately every 28 days – but period frequencies between 21 to 35 days are considered normal – and last between 1 and 5 days.

Are you affected by heavy, prolonged or irregular periods?

If this is the case, you are not alone. In fact 20% of women worldwide suffer from such excessive bleeding at some stage in their lives. This often occurs to women reaching their mid-thirties or early forties.

Why does it happen?

The inside of your womb has a lining called endometrium, which starts growing after each of your periods. This thickening of the endometrium is caused by hormonal activity; the inside of your womb is preparing for a possible pregnancy. After approximately 14 days an ovulation occurs. If the egg released by the ovaries is fertilized by a sperm it will implant into the endometrium, resulting in a pregnancy. If no pregnancy occurs, the endometrium will change during the second phase of the menstrual cycle and shed away, causing a period. Hormones have a significant impact on endometrial changes and periods. Other conditions, such as anomalies inside the womb or diseases can cause profuse bleeding.

How can you know whether your periods are normal or not?

Women affected by heavy periods commonly experience situations, such as:

If you have experienced one or more of these conditions described above, your periods are heavier than they should be and they probably interfere with your usual activities. Your gynaecologist can propose durable solutions to get rid of heavy or irregular periods and help you to recover your quality of life.

Heading toward a solution

Your gynaecologist will conduct a thorough medical examination in order to diagnose the cause of your heavy periods. Appropriate treatment options will be offered to you upon the results of your examination.

If you are suffering from heavy periods, why should you wait and endure it? A visit to your gynaecologist will lead to relief and better quality of life.

Heavy or irregular periods can be due to different causes. Therefore it is important to determine the cause of your bleeding disorders, whatever they are, in order to offer you the appropriate treatment for your condition.

Following the medical examination, you may be faced with several options for treatment:

The first line of action is most often drug therapy. There are many different types of medication in varying doses, and in different forms (tablets, hormonal intrauterine devices, injections, etc.). Drug therapy is easy to try and allows you to avoid surgery in the first instance. However it may be a continuous treatment that you have to take until you reach menopause. Some patients suffer from side effects associated with these drugs. For some women drug therapy is the solution whilst for others it simply does not work out, or not adequately enough.

A dilatation and curettage is a procedure, in which the physician manually scrapes away the lining causing bleeding from the womb, which can possibly reduce the amount of blood loss during periods for a few months. The layer removed is only superficial and profuse bleeding eventually returns after a few months. Physicians agree that it is not a long-term solution. However it is a reversible method, which will not affect future pregnancies. It is mainly used to retrieve a specimen of endometrial tissue for analysis, which will allow your gynaecologist to find clues for the choice of a future permanent treatment.

It is an operation in which the “womb”, also called uterus, is surgically removed. It is a definite cure for persistent heavy periods, as well as other conditions associated with the uterus, but it should be noted that hysterectomy is a major surgery involving risks and possible complications, which your gynaecologist can explain to you. The procedure itself lasts between 30 and 125 minutes and the hospital stay can be up to 5 days. Typical recovery time is 3 weeks but some women need up to 13 weeks for a complete recovery. In cases of organic lesions hysterectomy is the only solution, but in most cases heavy periods can be efficiently treated with less invasive methods.

Hysteroscopic endometrial ablation is a surgical procedure starting with the distension of the uterus using a liquid. The physician places a device inside your womb to burn or peel away the tissues causing heavy periods. Removing this tissue is difficult to perform but it will reduce or stop the bleeding during periods. The uterus will be preserved, only the internal lining – from which the bleeding originates – will be destroyed. This procedure is less invasive than hysterectomy but it requires extensive training and specific skills from the surgeon. Your gynaecologist can explain the benefits, as well as risks and possible complications associated with hysteroscopic endometrial ablation.

Cavaterm™ is a minimally invasive solution that durably reduces or even eliminates menstrual bleeding. It is a very safe and efficient method to treat excessive menstrual bleeding due to a hormonal imbalance or other functional disorders. Thousands of patients treated with Cavaterm™ since 1993 report excellent results causing significant improvements in their quality of life since they are no longer enduring heavy periods.

How does it work?

The inside of your womb has a lining called endometrium, which grows and then sheds off, causing bleeding. The Cavaterm™ treatment consists in eliminating the endometrium using a minimally invasive technique. A device equipped with a small balloon mounted on a tip is inserted vaginally into the womb (Picture 1), then inflated with a sterile fluid. Once filled, the balloon conforms to the cavity shape and lies against the endometrial lining, from which the bleeding originates. The fluid inside the balloon is gently heated for 10 minutes. The heat applied through the balloon safely coagulates the endometrial lining (Picture 2). This action will reduce or completely stop the bleeding. At the end of the treatment cycle, the balloon is deflated and the catheter removed from the uterus (Picture 3). 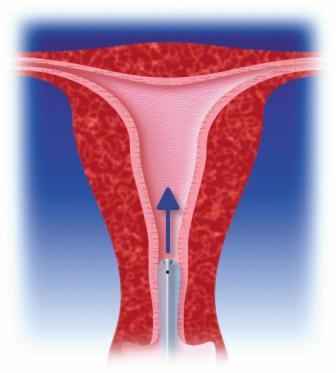 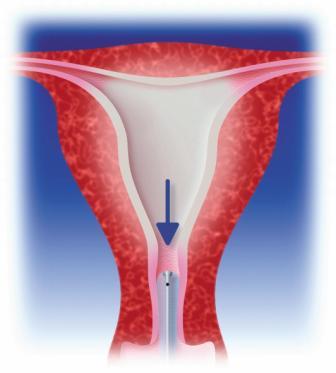 A method of choice

This treatment is free of hormones and requires no incisions. It is proven to be safe and effective. It will definitely be completed after a 10 minutes treatment cycle. Shortly after the treatment, the patient can go home and  take a day to rest or return to normal activities if she feels like it.

Many thousands of patients have been successfully treated with Cavaterm™ since 1993. This method has shown safety and proven efficacy. In addition it is free of lasting side-effects.

What can you expect after the Cavaterm™ treatment?

What can you expect after the Cavaterm™ treatment?

What else should you know?

If you have further questions, you may find answers in the FAQ section or contact us

If you are indicated for a Cavaterm™ treatment, we want to draw your attention to relevant advantages and benefits: